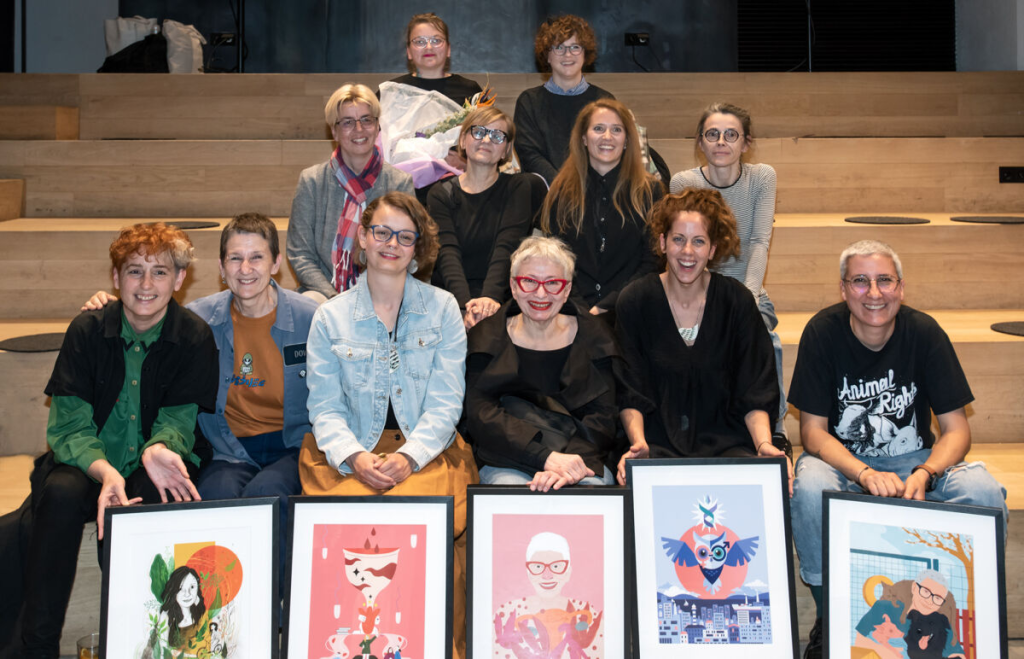 The 16th Vox Feminae festival started May 4th with an award ceremony – and it’s not any award, it’s the Fierce Women award. It is an award for remarkable individuals who have impacted our society through their actions, accomplishments, and creations. Over 80 women were nominated as fighters for a more righteous and more equal society, but 5 of them went home with the Fierce Women award.
In 2022 Fierce Women were: Jasenka Grujić (a gynecologist), Ivana Crnoja (an activist for animal rights), Marina Kelava (a journalist), members of the NGO PaRiter, and members of the SPEAR team.

Jasenka Grujić is a specialist in gynecology and obstetrics, and one of the loudest voices in Croatia that is boldly and continuously promoting sexual education and women’s right to choose. She is one of the loudest advocates of free contraceptives and a more accessible medical abortion. In the light of current events revolving around the case of Mirela Čavajda, she was also one of the first experts to comment on the situation and criticize her colleagues for violating female reproductive rights and not protecting women's reproductive health.

“For a long time, I thought that women’s reproductive rights and gender equality were something implied in itself. Apparently, that’s not the case. Actions of certain clerical and conservative organizations are trying to impose new standards. Their stream seems loud and powerful, but if you recognize my work as important, I will keep swimming upstream. It is my duty as a professional” - said Jasenka when presented with the award.

Ivana Crnoja is one of the founders of the NGO Pobjeda which revitalized an animal shelter in Osijek. In 202, only 2 employees took care of 350 dogs, cooperating with volunteers and marginalized groups of people. Ivana’s model of work and cooperation with local communities, schools and other NGOs is an example that inspires and motivates all of us.

“In a future that I live and fight for, a future that is better and more righteous, we will not be needing awards like these. That future will be an award itself!” - said Ivana.

Marina Kelava is the co-founder of H-Alter portal, where she worked as the main editor for several years. Her work as a journalist was awarded by the Croatian Society of Journalists, and she’s been a volunteering team member at Zelena Akcija’s BICPOP (Biciklopopravljaona; so-called bike kitchen) for many years now.

“It feels great to be named a fierce woman. I have recently gifted my friend and her daughter with the Fierce Women cards to inspire them. I am surprised and grateful for all these people who make the world a better and warmer place, bringing passion and solidarity into it” - said Marina.

Pariter is an NGO from Rijeka where Tihana Naglić, Marinella Matejčić, Marija Trcol and Maja Obućina are actively involved. Their work could be described as a combination of activism and advocacy, reporting systematic injustice, promoting women’s and human rights, as well as reproductive justice. Last year Pariter did important research about menstrual poverty in Croatia, which led to the Croatian government changing the taxes for menstrual supplies.

“We’re happy that advocacy of systemic and social changes was fruitful, and we continue to grow and contribute to the momentum of positive changes in our community, regardless of all challenges. We’re also happy that work coming from NGOs outside of Zagreb has been recognized: just like Croatia isn’t just Zagreb,feminism isn’t just one woman. Bravo and thank you to all the nominated women, to those who were awarded and to those who aren’t on this year’s nomination list, but are working hard and advocating the main goal: freedom to women, death to patriarchy!”

SPEAR team is active in promoting gender equality in the academic and wider community. The team consists of Snježana Prijić Samaržija, Sanja Barić, Sanja Bojanić, Brigita Miloš, Daria Glavan Šćulac, Ana Tomaško Obradović, Matija Miloš i Ivana Klarin. They have successfully implemented a plan for gender equality into the work of The University of Rijeka, which became the first academic institution in Croatia and the wider region that systematically implements measures aimed at gender equality.

“It’s ungrateful to measure which woman’s work was more meaningful. We encourage each other and celebrate each other’s success, and appreciate the efforts that sometimes aren’t supported by the society in a wider context. We inspire and encourage the new generations to be bold in their attempts to change this society for the better” - stated Gabrijela Ivanov, the conceptual founder of the Fierce Women award.

The original article on Croatian can be found here, while all photo credits go to Nina Đurđević