THE LEGEND OF MILJENKO AND DOBRILA: KAŠTELA’S TRAGIC LOVERS 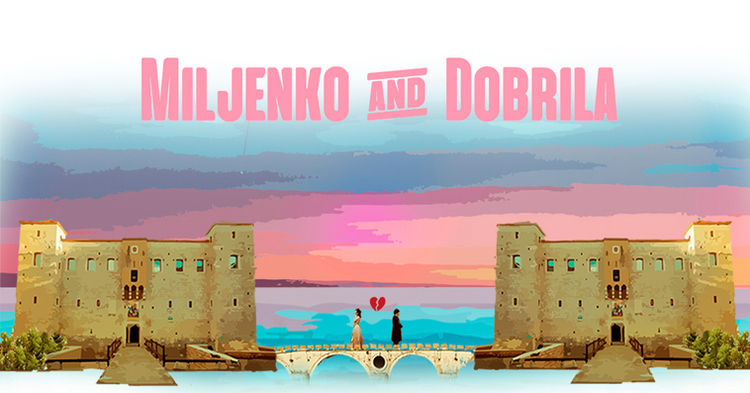 The tragic romance of Romeo and Juliet is one of the most famous love stories ever written. Shakespeare based his play on the life of two real lovers from Verona who lived and died for each other. Not many people know there was a similar story of a doomed relationship just on the other side of the Adriatic sea - the story about forbidden love of Miljenko and Dobrila.

In the 17th century Dalmacija, in Kaštel Lukšić - to be more precise, there were two powerful and noble families in war, Vitturi and Rušinić (Rosani). Family successors Dobrila Vitturi and Miljenko Rušinić fell in love with each other and had to meet secretly, because of a family feud. Even though their servants were helping Miljenko and Dobrila not to get caught, after a while their families found out about their secret romance. Vitturi and Rosani families were so furious that they decided to separate Miljenko and Dobrila. Not to mention they were quite successful and rigorous in their attempts to separate young and passionate lovers - Miljenko was sent to Italy to serve for the Doge of Venice and Dobrila was kept under strict surveillance.

But the Vitturi family didn’t stop there. Dobrila’s father, count Radoslav, wanted Dobrila to marry Družimir, an older nobleman from Trogir, and the wedding was prearranged without Dobrila’s consent. Luckily for Dobrila, a soldier from Kaštela somehow managed to get the news to Miljenko in Venice. Once Miljenko realized what was count Radoslav plotting, he had to defend his beloved one and save her from an arranged marriage. Just like prince charming, but on a boat instead of a white horse, Miljenko got to Kaštela right on time to stop the wedding and save Dobrila. This made Dobrila’s father, count Radoslav furious, as his family’s honor was offended. Radoslav intended to accordingly punish Dobrila for putting their family to shame by sending her to a monastery of St. Nicholas in Trogir. Miljenko couldn’t imagine being separated from Dobrila again and he wanted to prevent this from happening. On the night when Dobrila was to be sent to the monastery, Miljenko offered armed resistance, but failed to save Dobrila. Because of this incident, the local authorities have decided to send Miljenko to a monastery in island Visovac, from where he exchanged letters with his beloved Dobrila. Young lovers plotted about escaping the monastery, and so they did. Miljenko disguised himself as a monk and managed to escape, just like Dobrila did. Kaštela’s lovers were now free, which made their disapproving parents even more furious.

Count Radoslav realized the only way to get his daughter back is to offer peace to the Rosani family. And so he did. Good hearted Rosani family were happy to make peace with the Vitturi family, without having a clue what the Vitturis were actually plotting. The two families reached out to their children offering newly established peace and blessings and even supported their children’s wishes to get married. Kaštela’s lovers accepted the offer to come back home and decided to have a peaceful wedding in their hometown, now that their families have reconciled. After the wedding ceremony in August of 1690., vengeful count Radoslav was still restless and hateful. The night after the wedding, count Radoslav shot his son-in-law Miljenko on the bridge in front of the Vitturi castle. A couple of months after this tragic bloodshed, Dobrila lost her sanity, got seriously ill and died. Her last wish was to be buried next to Miljenko in the Church of St. Ivan, located right across the Vitturi castle in Kaštel Lukšić. In that church you can find their tomb with “May God Rest the Lovers’ Souls” engraved on it instead of their names.

Even though there aren’t many historical artifacts left to shed more light to the story of Miljenko and Dobrila, the legend was preserved thanks to word of mouth. The legend inspired many novels, plays, operas and movie scripts, written both in Italian and Croatian languages. Even legendary singer Tereza Kesovija performed “The Legend of Miljenko and Dobrila” in The Split Festival 1964. Traditionally, the town of Kaštel Lukšić holds the days of Miljenko and Dobrila every year at the end of July or beginning of August. Would you visit?