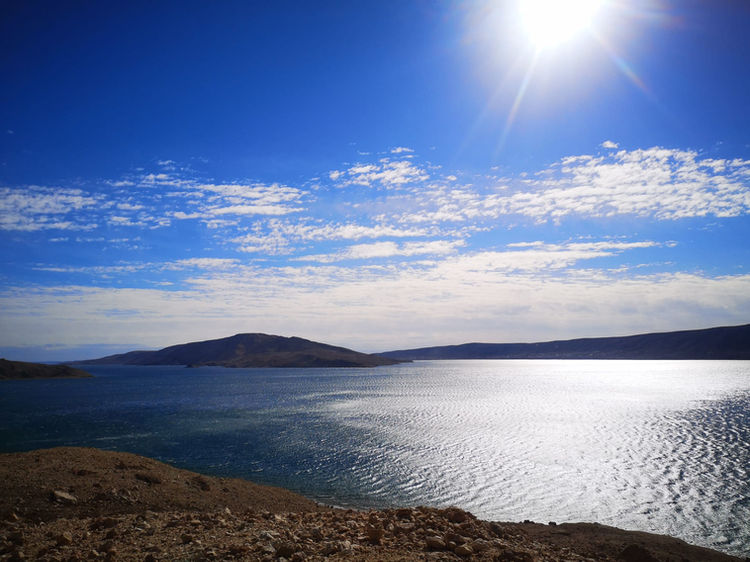 studied English Literature and recently graduated with a Masters of Social Anthropology. Her dissertation on COVID-19 and its effects on the mind and body of Mexican physicians will be published soon. She usually writes in Spanish and has been published in Spain, Mexico, Colombia and Peru. Her topics of interest include nature, adventure, language, books, food, culture, animals, conservation, and women's rights.

Last Saturday I met an invisible giant. First I saw his hands in the ocean, it was so strong I could see the surface of the water rising. And surprisingly I saw no birds flying. I was on a hiking trip organised by Hiking & Adventures Croatia. We arrived at Pag Island around 9:30 am and I could feel the wind as soon as the car doors opened. My husband hopped out and closed the door. I stood in the car, impressed by the feeling. I put on my gloves and hopped out. The wind was as strong as it could be (probably an underestimation, locals have told me Bura is even stronger sometimes). We met the rest of the group while preparing ourselves. There were around 30 enthusiastic hikers, some borrowed more jackets, gloves or hats. It was a sunny day but when Bura blew well you knew it was there.

We started the Life on Mars trail, I couldn’t even see a path. But Dragi guided us and there was certainly a path. The first steps made me feel like the trail was there only to be discovered. It was a different hike than the others we have made in Croatia (Krupa Canyon and River; and Plakenica for solar panels), it was less social. It was hard to keep a conversation with other hikers. The only voice to be heard was Bura’s. Sometimes it pushed me back. It was exciting but I had to admit I was not enjoying it a lot. I asked myself a couple of times if having gone that day had been a good idea. The views were majestic, but I couldn’t take the time to enjoy them. I needed to find my balance constantly. Mind my steps. Fight the wind. Silly fight!

We arrived at a small beach, Slana, and rested. Some hikers went for the Via Ferrata. I was tired. I also thought if I did not like the feeling of the Bura on land I would probably have to avoid the small iron path. One of the most adventurous women I know started the Via Ferrata, and didn’t finish it. When she came back and told me the wind was too strong I felt puzzled. I asked myself if the trip had been a good idea. I could tell the hubby was tired too and some of the faces looked way too tired. I sat there enjoying the view of the ocean, at least I could count on the beauty of the salty water. Something caught my attention, when Bura blew, the surface of the water rose and for a fraction of a second there was a rainbow.

The way back I had a different feeling. The Bura was still blowing, sometimes I think it was even harder than before. Nevertheless this time I was enjoying it. It was on my back and I felt as if it was helping me. It pushed me to my goal. My steps were quicker. I started to get long and deep breaths of this invisible giant. It was no longer hitting my face, but it got my back. Also, knowing the way always makes me feel more at ease. Going back is somehow always faster. I found myself wishing it was longer.

It was not, so we arrived in the car. My feet stopped. Bura stopped too. I reflected on the day and I understood the path had not been there to be discovered. It had been a path that hikers had formed little by little with their feet. Steps show us what we are capable of. But while we go on, our feet go with us and only the trails remain. Bura goes wherever it wants and leaves its traces: rising water from the surface of the water, brief rainbows, pushed humans and no birds in the sky. Bura is an invisible giant that we somehow can see. If you are in Croatia seek the Bura, even if you don’t, it will find you!